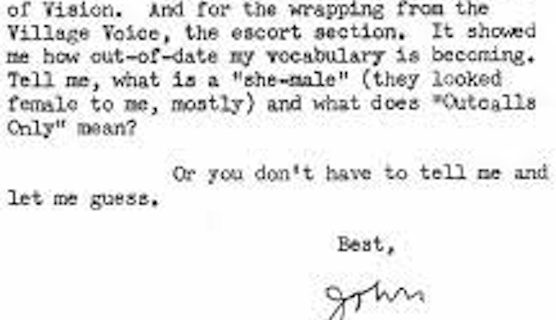 Many  years later he still appears to to be intrigued by novel ideas (or ideas for a novel?) Updikes old address book with childs (?) writing: I want to go back to Ipswich and I miss you 4 Highland Ave Ipswich Mass. The ink isnt Updikes could the pencil be be his? “Saying that cultural objects have value,” Brian Eno once wrote, “is like saying that telephones have conversations.” Nearly all the cultural objects we consume arrive wrapped in inherited opinion; our preferences are always, to some extent, someone else’s. Visitors to the “Mona Lisa” know they are about to visit the greatest work of art ever and come away appropriately awed—or let down. An audience at a performance of “Hamlet” know it is regarded as a work of genius, so that is what they mostly see. Watts even calls the pre-eminence of Shakespeare a “historical fluke”. Giving the mundane its beautiful due John Updike

Attention is what creates value. Artworks are made as well by how people interact with them — and therefore by what quality of interaction they can inspire. So how do we assess an artist who we suspect is dreadful but who manages to inspire the right storm of attention, and whose audience seems to swoon in the appropriate way? We say, ‘Well done.’

The question is: ‘Is the act of getting attention a sufficient act for an artist? Or is that in fact the job description?’

Perhaps the art of the future will be indistinguishable.  From Brian Enos diary